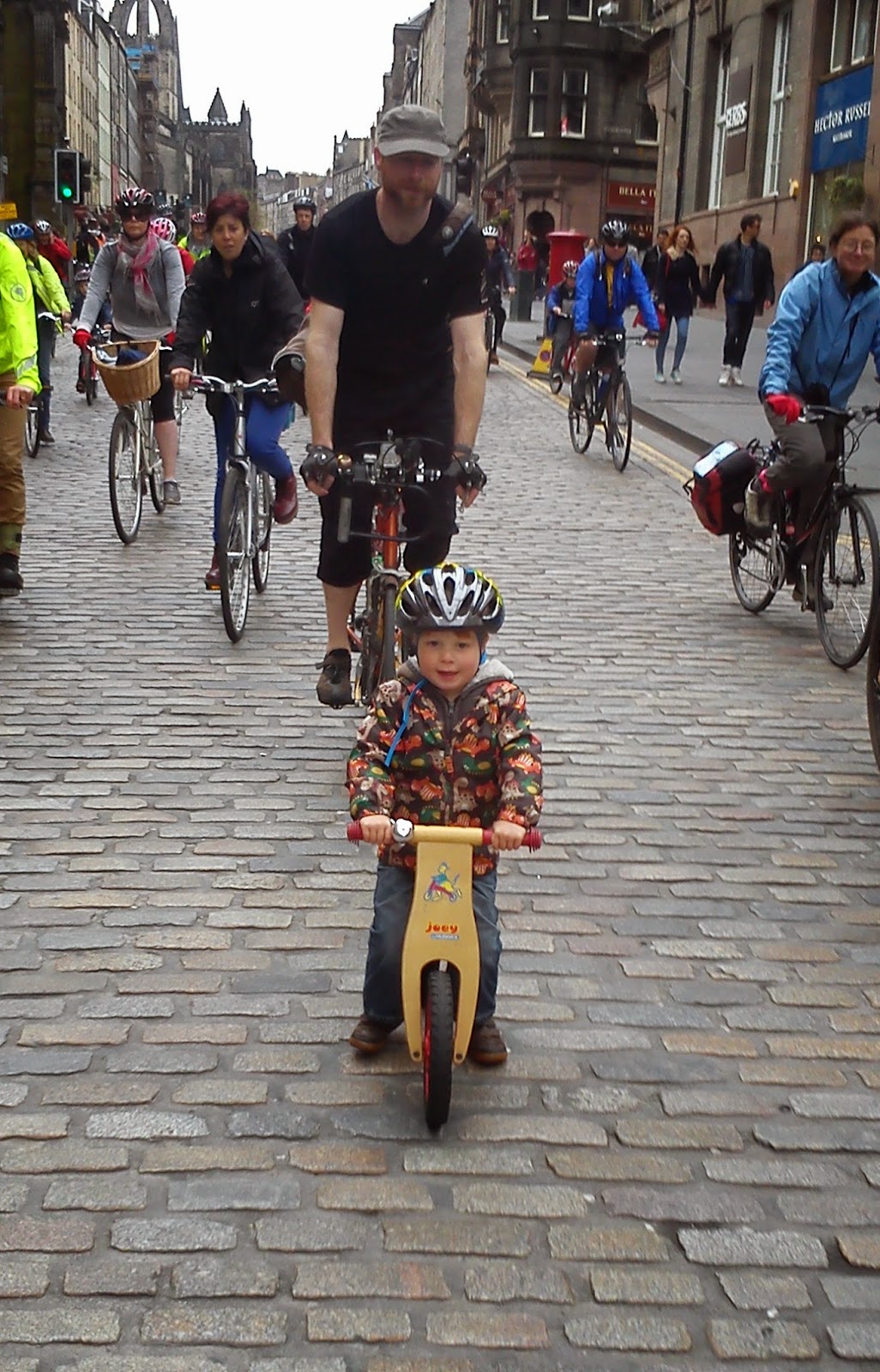 I was in Edinburgh today to take part in the 2014 edition of Pedal On Parliament, a rapidly growing protest march (?) from the Meadows to the Parliament Building at the foot of the Royal Mile.

As always seems to be the case with me, just getting to the start line was a chaotic rush. My bike has not been working properly since I got back from holiday, with the chain jumping gears seemingly at random, thus making it virtually unusable. As such I've (regrettably) been driving to work for the last week - in other words, re-acquainting myself with all the reasons why we need a proper cycling strategy in Scotland (*sigh*).

Given that I'm rather incompetent when it comes to mechanical things (I can understand them but my hands just don't work properly when there's a screwdriver or a hammer in them!), Saturday was the first proper day I'd have the opportunity to get to the bike-shop to get it looked at. I thought I could just about limp over to the shop, drop it off, then head into town for the train to Edinburgh. About halfway there, my chain decided to snap (second time this has happened recently) meaning I had to do that most inconvenient of things - walk the bike along the pavement.

It was therefore with more than a sense of consternation that I discovered the shop was closed - I really hope it was just because the owner was at PoP! Hence I had to turn tail and head back to the house to drop off the now useless device and then change clothes (despite wearing gloves, I'd somehow managed to get oil on my trousers - curse you, impractical touring bike)! After a bit of fretting and charging about the house, I managed to get safely out and onto the Edinburgh train for 10:45 - Phew!

Hurrying along North Bridge, I just about managed to make it to the start of the route just as the bells and whistles rang out at 12 - PoP was officially starting!
The pictures don't really do it justice, but the line of people on bikes stretched right the way along the path over to the road at the other side of the Meadows. It was really heartening to see the diversity of the crowd - men, women, children, elderly people; folk on foot, on MTBs, tandems, fixies, recumbents, cargo bikes - a few people even had mobile sound systems! In particular, I was taken by the fact that there was a good mix, sartorially speaking. Not everyone was in hi-viz, lycra and helmets - plenty of folk in "normal" dress, as well as a large contingent of dapper trendy-types (usually on vintage Pashleys!).  If this isn't illustrative of the suppressed demand for cycling, I don't know what is.


Perhaps I missed the memo, but  the pedestrians I saw appeared to be passers by and onlookers - most people taking part were on bikes, which made me feel slightly left out (I really wish the bloody thing was working). In what might be regarded as a foolhardy move, I chose to march on the path with the people on bikes - I wanted people to know that I was part of the event - which meant that I was frequently in the midst of a horde of bikes but there was a friendly atmosphere, with people on bikes looking out for me and each other without incident.
As I marched down the Cannongait, the main peloton took advantage of the incline and raced ahead, leaving me to walk down the middle of the closed-off street on my own, which made me feel a little silly and self-conscious. Eventually I reached the main contingent at the green outside the Parliament, where I met Sally Hinchcliffe - one of the organisers of PoP and a leading member of The Cycling Embassy of Great Britain. She was somewhat pre-occupied with directing people to talk to their MSPs but it was nice to put a face to a name finally - a common phenomenon of the internet age I suppose...

(I also noticed some of the Cycle Hack contingent hanging about, which reminded me that I've yet to get my ticket - I was a bit shy to go and speak to them unfortunately...)

After a bit of delay while the remaining stragglers arrived, the speeches began. In something of a coup for the event, the first set of speakers were all children, who (aside from some understandable volume issues) bravely spoke really well and articulated the primary issues better than most of the adults who followed. The only exception being the dignified speech made by Lynne McNicoll - co-founder and trustee of The Andrew Cyclist Charitable Trust - who brought home why making Scotland's roads a safer place is so vital.


The keynote speaker though was notionally Keith Brown, MSP, who was actually more politely received than I expected (having anticipated the sort of reception usually reserved for education ministers at teaching union conferences). In terms of the content of his speech, well he was a little defensive when talking about his department's record, as well as the paltry £4.5M (over 2 years) he conveniently managed to cobble together in time to announce on the eve of PoP. The significance of that announcement seemed to be more about it being sourced across multiple departments including Health and Sport, rather than being wholly from the Transport budget - apparently there is no precedent for this in the Scottish Parliament - than the actual size or use for the funding. Given that PoP are asking for £100M per year, the sums involved in this announcement are clearly inadequate and tokenistic.

The most important element of his speech was the fact that he was delivering it at all. The fact that he was brave enough to attend suggests that PoP is starting to be taken seriously by some at Holyrood - a fact underlined by the presence of Willie Rennie, leader of the Lib Dems in Scotland, who appeared to understand the issues facing people on bikes. He talked anecdotally about commuting from Fife to Edinburgh.

Probably the most disappointing element about the political presence was the distinct lack of a west coast contingent - it was very much Edinburgh-centric when it was supposed to be about Scotland as a whole. As far as I could tell, for the whole of political cohort Glasgow, only Patrick Harvey MSP bothered to attend (apparently Councillor Frank McAveety was there too but I never saw him). In this Commonwealth year, shame on Glasgow's political class for failing to show up. Edinburgh is only a 50 minute train ride away - it's hardly the ends of the Earth!

The biggest cheers of the day (for political speakers) were for Alison Johnstone, Green Party MSP for Lothian who clearly (and predictably) "gets it", with regards to the obvious benefits of building a true cycling culture. Unfortunately the Greens are still very much a marginal (albeit noisy) presence in the Parliament - which underlines why it's even more vital to get the mainstream parties on board.

Thereafter, the event came to an end, with people still milling about and chatting amongst themselves. Feeling a bit spare, I departed for a pint in the art deco-themed City Cafe and then headed off for the train. A feel-good worthy day out but one which underlines the continued need for sustained pressure - PoP undoubtedly helps to frame the conversation, but there's a long way to go if the aims of the manifesto are to be achieved. Assuming it happens, I'll be going again - hopefully this time I'll be able to persuade some friends to come along!


(*) I don't make a habit of taking pictures of people's kids in public incidentally, but it seemed an appropriate image for PoP!
Posted by Unknown at 10:20

Email ThisBlogThis!Share to TwitterShare to FacebookShare to Pinterest
Labels: Pedal On Parliament