Back to Glasgow now! After last weekend's bike débâcle, I finally managed to get my bike in for some attention at the repair shop. As I waited for it to be fixed, I decided to take a stroll around the area to get a coffee and a pastry, as one is wont to on an idle Saturday with no large cycle protests to attend.

The shop sits on Pollokshaws Road in the heart of the South-side in a small area just north of Shawlands called Strathbungo - an interesting part of the city that straddles the line between more affluent Crossmyloof and Maxwell Park, and the less salubrious areas of Eglinton, (Eastern) Pollokshields and Queens Park. In recent years it's become a little enclave of bohemia, with boutique hipster brasseries like Gusto and Relish and The Bungo rubbing up against traditional working class stalwarts like Heraghtys and The Allison Arms. For a small area, there's quite a bit of cycle infrastructure on display, although it still falls down in key areas of safety and directness.

Strathbungo lies at the centre of a couple of key local through routes, specifically the North-South route along Pollokshaws Road and East-West routes along Calder Street, Allison Street and Nithsdale Drive/Road/Street, as well as bisecting a couple of train-lines. About 10-15 years ago, traffic routes were amended to create a gyratory system - plans which were vigorously opposed by local businesses and residents - which involved a implementing several one-way streets and the closing off roads to through motor traffic.

At the same time, some cycle-specific elements were implemented to complement. Most of it still survives, but as with a lot of contemporary infrastructure, without maintenance it has deteriorated somewhat. At the same time, there are some ideas that were implemented at the time which seem - in hindsight, quite forward thinking. For example, all the way up Pollokshaws Road, there are examples of raised pavements at junction which give the impression of pedestrian priority.

As we shall see later, regrettably this approach seems to have been abandoned for newer projects -  because it's difficult to keep maintained or because it annoys drivers? There's also an example along Torrisdale Street of our old friend the cycle contra-flow, except this time its a fully protected example, whilst still maintaining vehicle parking.

It wasn't perfect though - it's under 100m long for a start. Perhaps it's difficult to see but the lane is also on the wrong side of the road for the direction its intended for (east to west) and is arguably too narrow for a bi-directional route, but the fact that this even exists shows that it's possible. In addition, if you continue the route further towards Queens Park and Victoria Road, you have a potentially useful low traffic route which is shorter than the driven equivalent.

Regrettably, the reverse is not legal - the eastern end of Torrisdale Street is also one-way westbound, but lacks the cycle contra-flow element. This means that cycles heading eastwards need to divert onto the two-way section of Queen's Drive (albeit turning onto access-only Albert Avenue) or take a detour along Niddrie Road and virtually traffic-free Prince Edward Street - the Glaswegian equivalent of "Quietways".

The western half of Strathbungo resembles something close to the Woonerf's of the Netherlands, namely narrow roads primarily aimed at local access, except minus the lower speed limits. Motor vehicles haven't been removed here, but there's no through roads, with the exception of a narrow lane for bin lorry access at the rear by the railway line.

A little further south, we have another example of what you might call classic filtered permeability, albeit somewhat compromised by the lack of double yellow lines preventing parking across the mouth of the path.


Heading south along Pollokshaws Road towards Shawlands, you are struck by how wide the roadway is and how underused the space is. Again, Glasgow has done half the job, by taking away some general traffic lanes but without being brave or radical enough to the extra step to make cycling easy and pleasant. Again we have the raised pavements across minor roadways, but that seems to be more about traffic calming than prioritising pedestrians.

As was customary for the time when it was developed cycle provision along here consists mainly of a shared bus-lane in the southbound direction, with nothing on the northbound carriageway. But there's also a median here which appears to serve no purpose that I can see - pedestrians can't (or wouldn't want to) cross here. The southbound pavement by the park is also pretty generous - I walked up here on a dry Saturday afternoon and there was barely any foot traffic other than the odd jogger.

Continuing on to the border with Shawlands, I was struck by presence of street-lighting attached to the side of tenements, as opposed to the usual free-standing affairs.

Clearly it is possible to do that and, as Glasgow has retained a lot of its traditional sandstone tenements, it seems strange that they haven't made further use of this sort of arrangement. It would certainly help to reduce the plethora of street furniture that litters the pavements.

And onto the crossroads at Langside Road where Shawlands really begins. My fellow Glasgow-based cycling blogger Darkerside has discussed Shawlands at length before, so I won't repeat all of his good work, but there have been a few changes since that post was written which bear comment.

There are apparently plans afoot to transform the area around the crossroads, specifically the Mitchell Halls and surrounds, to turn it into a form of civic square. As you can see in the map and my picture below, there's no shortage of space, but how to allocate it?

The problem here is the combination of the wide banking left turn (which acts as a traffic light by-pass - the lights across it are pedestrian signals only) and the bus lane. If they close off the left lane, I think the bus lane probably has to go too. Alternatively, they could be radical and ban left turns here altogether, although that would have the effect of forcing more southbound vehicles to stay on Pollokshaws Road, and thence travel through the warren of residential back streets between it and Tantallon Road.

A bit further along, a section of the main shopping street has been renovated recently (still incomplete), which has widened the eastern footpath considerably and replaced the tarmac with attractive, expensive-looking pink paving stones (similar to what has been done in Merchant City).

Regrettably, the have also removed some of the raised beds over the side streets, replacing this instead with dropped kerbs:


Again, perhaps fashion has changed amongst Glasgow's highway engineers but it seems a shame that this idea has been discarded, given that it could work well if combined with segregated cycle paths.

The widened footpaths have definitely to be commended, and it was apparent that some of the local cafés had taken advantage by extending outdoor seating into it - precisely the kind of thing that makes an area seem much more pleasant. They have also retained the on-street parking, but yet again Glasgow has failed to take into account cycling into the design plan.

This new section corresponds to the footprint of the much-reviled Shawlands Arcade on the western side of the carriageway. Space for the extended pavement has been reclaimed by removing the totally unnecessary central reservation, but I would argue that even more could be done by either entirely removing parking from the western side or by reducing the width of the pavement.

Now I appreciate the latter suggestion seems a bit extreme, but there's a good reason I make it. The footpath at the roadside only really serves the people who park on the road there - the shops are in an elevated promenade and there are only a couple of entrances for pedestrians at either end of the arcade area. Assuming the Arcade stays in its present form (not a given but there are no current plans to demolish it as far as I'm aware), pedestrian through traffic mainly limits itself to the promenade area. Removal of parking would be a more palatable choice but every bit as contraversial, but there is a relatively un-tapped resource - the Arcade's own 300-space car park, which is free for the first 60 minutes. There have clearly been attempts to promote its use recently, as evidenced here: 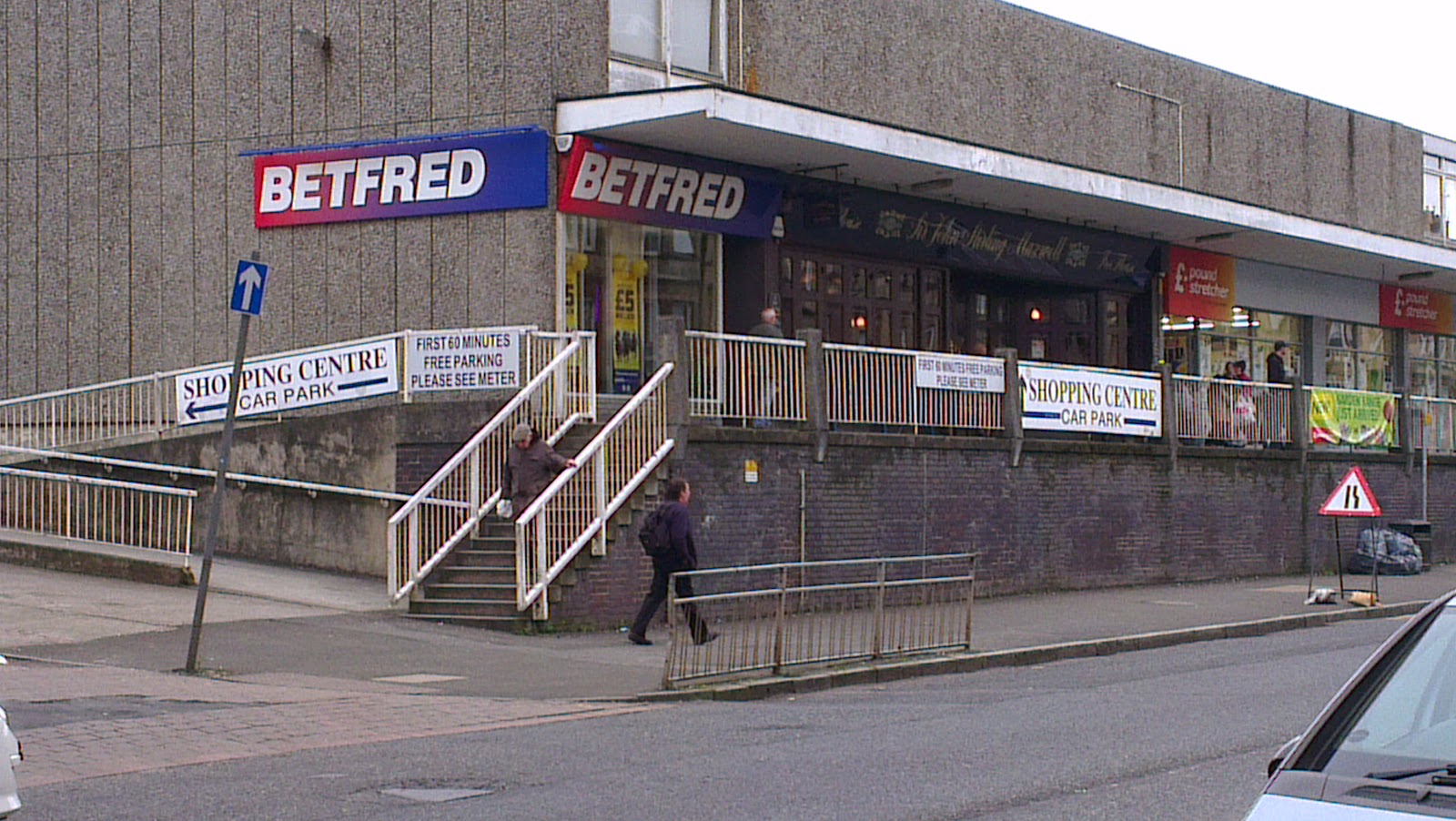 That provision easily out-numbers the on-road capacity and is significantly cheaper - all it requires is a bit of consultation and some promotion to change driver behaviour to accept this, and all that under-used space could be freed up for better northbound cycle provision (or indeed creating a wide bi-directional path), whilst still retaining loading facilities on the southbound carriageway.

At the top of the shopping area, its difficult not to conclude that something could be done to improve provision here. Look at all the sheer amount of roadspace  in the next picture:

The room is there, we just need the will. And for all its faults, Shawlands still manages relatively well - the Arcade aside, most of the shops that line Pollokshaws and Kilmarnock Road are populated and not just by charity shops and bookies. There are green grocers, butchers, bakers, little fashion boutiques, as well as a slew of little coffee-shops, restaurants and bars. I even nipped in to "EAT" cafe on the way back - the place that had chided Glasgow City Council for raising parking rates. Maybe if they paid more attention to where there customers actually came from, they'd be more positive about the changes in the area.
Posted by Unknown at 07:27