A few weeks ago, I was sent an email from my local councillor, advising me that a short section of the southbound carriageway of Aitkenhead Road from Cathcart Road to Calder Street was going to have some sort of cycle infrastructural treatment.


Subsequently, it came to my attention that the work - as it were - had been completed. Despite living quite close to the affected road, it isn't on my normal commuting route, therefore I hadn't had the opportunity to take a look until a couple of weeks ago when I took these pictures (on an uncharacteristically nice day). I'll go through each of the items in due course, but first a bit of background on the route.

Aitkenhead Road has traditionally been a important tributary to one of the primary routes between Glasgow's mostly residential Southside and the city centre. It extends from Cathcart Road in the North to Carmunnock Road in the South, connecting Polmadie (and M74's junction 1A) to Toryglen, Mount Florida and King's Park. Overall, it functions as a go-between the Gorbals, Rutherglen and Castlemilk, once Europe's largest public housing scheme. In terms of local facilities and amenities, Aitkenhead Road passes close to a primary school (St. Mirren's), two large secondary schools (King's Park and Holyrood), a 24-hour Asda supermarket, a police station and a railway station (King's Park), as well as Toryglen National Football Centre and (of course) Hampden Park - Scotland's national football stadium.

Cycle infrastructure-wise, it is one element of the Commonwealth Games routes between the Velodrome at Parkhead, Hampden Park and the Cathkin Braes Mountain Bike Park. (Note: caution should be used in describing this is a "route", as it almost exclusively consists of shared use pavements, marked by this strange paving scheme).

It probably ought to be stated firstly that the particular section in question is one of the (marginally) less busy parts - most motor traffic either originates or diverts onto Polmadie Road and the aforementioned M74 - but there is a significant volume of local traffic, particularly at the junction with Cathcart Road (itself part of a major North-South route).

What is apparent from the work that I obvserved is that this is clearly some sort of experiment in various configurations of so-called "light" segregation - in other words, anything that doesn't require any major structural changes to the footpath or the roadway. I would surmise that - rather than provide a useful route for cycling, GCC merely intend to use this as a testbed for future schemes involving this sort of intervention. Indeed, the choice of location itself suggests this.

Firstly, the new provision - such as it is - only extends to about 700 metres end-to-end. There are few, if any potential conflicts to be found (with two notable exceptions). There are no houses adjacent to it, with only trees and turf lining the southbound carriageway - thus no parking problem nor reactionary residents to placate. Then there's the generous but barely used pavement and four lanes-wide road itself (minus a bus lane on the northbound carriageway). They've even managed to avoid a bus-stop by starting the treatment further along the street, rather than directly at Cathcart Road.

The route starts with some common-or-garden advisory painted cycle lanes - the sort of rubbish that's been used for several years on other routes such as Kilmarnock Road (much to the chagrin of some notable cycle bloggers). You will note that the width of the lane looks to be the "minimum" standard of 1.5m, and this is maintained throughout the rest of treatment. So far, so familiar. But then this happens:

The painted lane gives way to a hatched paint arrangement replete with periodic signposts - the sort you frequently see at the start and endpoints of currently segregated routes like "Connect2". The use of cones at the start of the section suggests a nervousness around how drivers will interpret these signs.

Each marker is spaced at approximately 2.5-3m intervals. I would guess that the rationale behind using this is that it potentially increases the effective width of the lane and allows users to exit the lane between the spaces, whilst (presumably) discouraging egress by motor vehicles - although given the damage done to these markers on other schemes, I would suggest this isn't a given.

After a slight gap, a new type of provision starts - a sort of continuous temporary kerb. As you can probably tell, there's clearly been a concern that drivers would blithely rattle off this "invisible" facility as (unlike the previous section) cones are placed along its whole length. 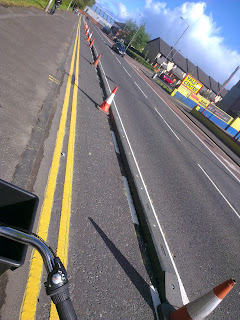 The kerb appears to be some sort of hardened plastic, which is bolted into the ground. I didn't attempt to damage them in any way, but it seemed sturdy enough to stand on. With that said, no attempt has been made to make the kerbs "friendlier" by angling them at 45 degrees. 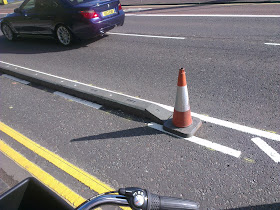 As a result, the effective width of the lane is significantly reduced, as demonstrated below:

Thererafter, we return to a paint-only section, this time with a hatched area. It looks as if the right hand side is mandatory (i.e. drivers cannot cross it) and advisory on the left, presumably to allow people on bikes to cross back into the roadway - I have no evidence to suggest if this is indeed the case, however.


After this section ends, we encounter yet another species of plastic barrier bolted to the ground, followed by these cute little guys:


Each of these plastic blobs were labelled either "Whale" or "Orca", which suggests a cetacean-based evolution of the so-called "armadillo" - they were similarly bolted into the ground. It looks as if there's been an attempt to make them more forgiving if cycled over, as the angle at which they meet the cycle lane is much shallower than the roadward side.

At the end of this section, we return to a traditional painted advisory lane, just at the point where there will be a conflict:

What you can just about see in the picture is the start of the entrance to a sizeable industrial unit - the triangular section is part of an enormous mouth, to allow HGVs to turn into it from both directions, as per the Google Maps image below: